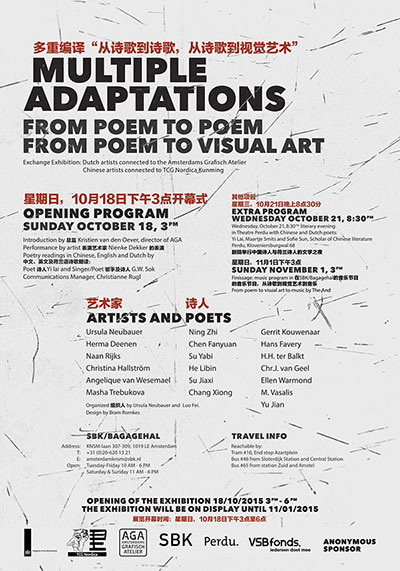 The Amsterdams Grafisch Atelier and TCG Nordica, an art center in Kunming (China) joined forces in a transnational project that, focuses on the interrelation between text and image, specifically between Dutch and Chinese poetry in translation and art works inspired by them.
Six Chinese participants based their paintings and drawings on poems by H.H. ter Balkt , Hans Faverey, Chr.J. van Geel, Gerrit Kouwenaar, M. Vasalis and Ellen Warmond, translated into Chinese by Maghiel van Crevel and Ma Gaoming. Each of the six poems are enigmatic texts full of paradoxes and opaque meanings, that present an enormous challenge to the translator, at the same time providing the visual interpreter with ample space for a non-illustrative approach.
Six Dutch printmaker/artists produced monumental prints inspired by poems of the famous contemporary Chinese poet, author, and filmmaker Yu Jian. “Staunchly unlyrical” and making his readers “see eternity in the most everyday and unexpected places” (Simon Patton), Yu Jian’s poems present their visual interpreters with the equal challenge of tuning into the foreign voice, searching for affinities, and keeping their own idiosyncratic vision.
To facilitate comparison and analysis, all works are shown jointly with the texts that are printed on banners, forming thus an integral part of the exhibition. Both partners of the project stress the performative nature of the project by reading and performing the poetry at the opening and in separate programs.
The initiative for the exchange came from Ursula Neubauer, an Amsterdam artist who had visited Kunming in the fall of 2012. The project has been worked out and coordinated jointly by Luo Fei, former director of TCG Nordica and Ursula Neubauer, representing the Amsterdams Grafisch Atelier.
The event in Kunming took place, with great success, at the gallery of TCG Nordica between April 24-May 31, 2015.
See: http://en.tcgnordica.com/2015/multiple-adaptations

In Amsterdam the project will be presented at SBK KNSM/ Bagagehal
from October 18 through November 1, 2015.
The opening will include a performance. Speakers and readers are Kristien van den Oever, director of the Amsterdams Grafisch Atelier, Yi Lai, Chinese poet and literary scholar at the (Central China Normal University, Wuhan). G.W.Sok, singer and poet and Christianne Rugl Communication Manager. Performance artist Nienke Dekker will interpret two 2 poems of the exhibition.
Sunday November 1 at 3 p.m. a closing music program, from poem to visual art to music by The And.